Me: I know people love Twitter. But for some reason even when I try to become active on it, it feels like a chore. I can’t get into using it. I have no idea why-

Anyway. This is going to be hopefully a bit shorter. MAYBE. It’ll also be a bit more papery.

You may know of Inktober: it’s the time each October when a bunch of sickeningly talented people get out their pens and draw something in ink each day. Usually these drawings are based on a one-word prompt handed out by Inktober HQ. Many of the drawings are staggeringly impressive. However, most are not done with fountain pens so WHO EVEN CARES. Ahem.

Now. I do draw, but I don’t think I can commit to the Inktober schedule with drawing. But I also write. So my own plan for Inktober is to write/post a piece of flash fiction each day based on the one word prompts. For the uninitiated, flash fiction is like a short story… but shorter. It’s written to word limits that can be extremely tight – sometimes as little as 100 words. I don’t know who called it flash fiction, or exactly why, but I like the term because it often reads like that. Imagine a darkened room, and then the lights come on, just for a moment. You see a certain amount before the lights go off, but then you are left still telling the story to yourself after the words are finished. That’s what good flash fiction looks like.

This plan comes with one small pitfall: I’ve never written flash fiction before. Readers of this blog will be aware that I’m not known for my brevity. A major obstacle to my finding a literary agent is that my manuscript is a bit chonk for a debut. But I’m told that short stories, and flash fiction in particular, are brilliant for honing your writing skills.

I don’t know what exactly I’m going to do with this flash fiction. I may post it on here. Haven’t decided yet. I’m not going to set a word limit as bonkers as 150 words. I am intending for each piece to be in the 300-600 range.

I don’t think I’ve written anything that short since…

… well I learned to write circa 1985 so I assume I started on some short stuff? Memory’s a bit fuzzy tho.

Can I write flash fiction? I HAVE NO IDEA. ONLY ONE WAY TO FIND OUT. And that way involves A WORTHY NOTEBOOK.

I work at a university, in an area of London which is very university-heavy. As a result, my office is very near a Blackwells, which is a book shop geared towards academic and scholarly books, with a bit of other stuff thrown in. This one has a gifts section (it is still touristland, after all) and among these gifts are About Blank notebooks.

About Blanks take old hardback books, take the pages out and turn them into notebooks. They’ll set you back about £16 a time and each one is obviously unique because they’re made out of whatever books they get in. Which means that they vary in their dimensions and how cool the cover is. Sometimes you even get a nice illustrated dust jacket.

I’ve got some mixed feelings about destroying books to turn them into other things. I love books, and I feel a reflexive horror whenever I see that someone has cut up pages to use for their art project, or shoved a little bit of book into a piece of jewellery. One of the reasons why this bothers me is that the books being used in this way are usually fine and sometimes even new. Someone could pick that volume up and read those pages. This is in some senses a bit silly. If someone wants to cut pages out of a Harry Potter book and use it for their decoupage, nobody is really losing out. For the publishers, it’s yet another sale. I don’t suppose we’re going to run out of copies of these books any time soon. So I might not be having a strictly rational reaction. When is a piece of paper not a piece of paper? When it’s a book, or a photo. Fabric takes on new significance when it becomes a flag. We all do it. Not so much the flag thing in my case. Never have understood that one.

But there’s no doubt that there are a lot of books that are… a bit knackered. Many of them won’t find another reader. They might be a bit mildewy. Second hand bookshops and charity shops don’t want them. Libraries have more of them than they know what to do with. And they’re not easy to recycle in their current state. Are they going to landfill? Not in my town. No, I mean that in a non rhetorical sense – our rubbish is incinerated to fuel a power station. Which means these books are going off to be burned. WHICH IS OBVIOUSLY WORSE THAN WHATEVER MOD-PODGED MONSTROSITY THAT ETSY SELLER WAS THINKING OF.

I went into Blackwells when I was exploring the area around my office, and I’ve been kinda coveting one of these notebooks ever since. Which one did I end up choosing? Of the notebooks available when I went in, Essays In Musical Analysis Vol I: Symphonies by Tovey seemed to be the most me. me of all the ones available. I’m kinda musical after all.

Who is this Tovey chap? As it turns out, he’s Donald Tovey (1875-1940), a conductor, composer and (obviously) dude who wrote about music. This series of Essays in Musical Analysis were the Classical Music for Dummies of their day. I have to admit that I hadn’t heard of the guy before, but if you’re curious you can find recordings of some of his compositions on YouTube.

So, back to the notebook. The old cover is a bit beaten up but you’d expect that, and it works just fine as a notebook cover. 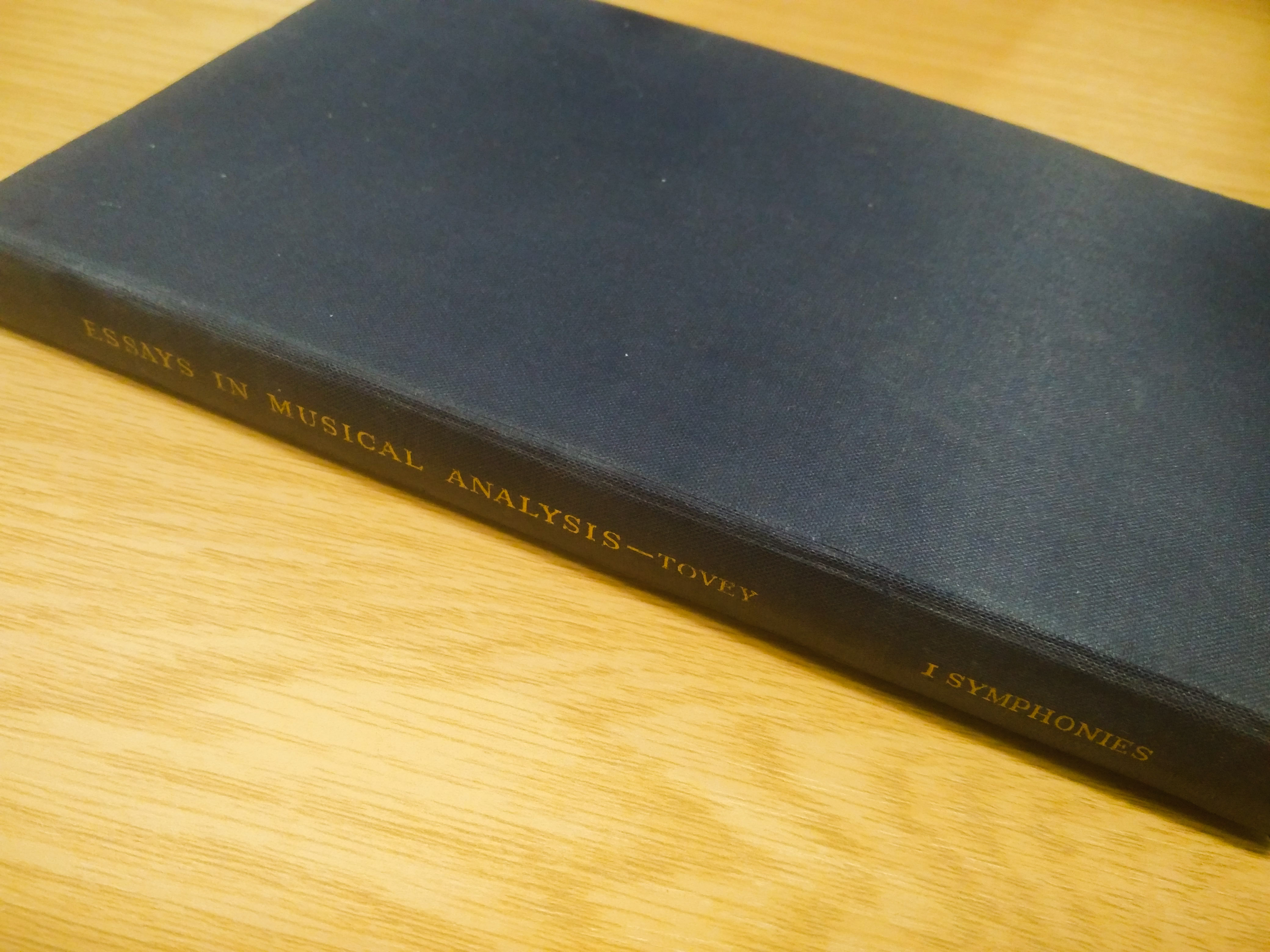 I was surprised by how nice and smooth the paper was. You shouldn’t be surprised when you pick up a notebook from an unknown entity and it contains paper that isn’t terrible. And yet. THESE ARE THE TIMES WE LIVE IN. WOE! WOE! The simple reason is that biros don’t care if you’re writing on the smoothest and most luxurious paper in the world, or on a stale piece of bread. Fountain pens care a great deal, however, so those of us who use them spend a lot of time saying “but is that paper any good? I like this notebook but I DEMAND someone else tries one out first!”

These were originally designed as sketchbooks, which is why they’re all blank. There are no lined or grid versions available, although it’s just about translucent enough that you could use a line guide under it if you wanted to. It’s a fairly dark cream colour, which might not be to everyone’s liking – especially for art. It reminds me of Clairefontaine’s Trophée range of printer papers, which has a little more tooth to it than Triomph, but performs beautifully nonetheless. 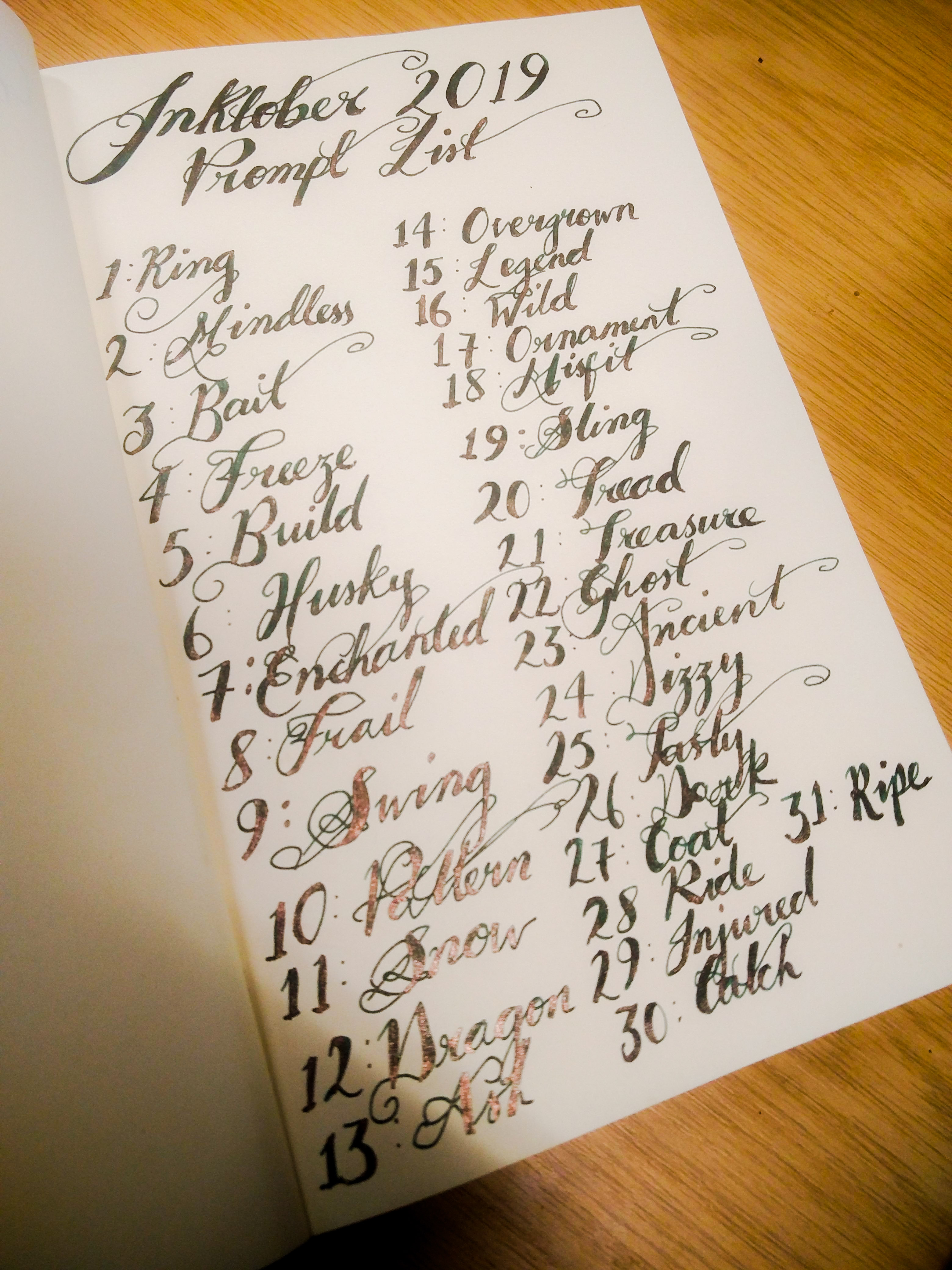 You can get About Blanks from a selection of shops across Europe (check their website) or you can order online.

One thought on “Flash! Ahhhhh!”