Which if my understanding of French pronunciation is correct, sounds a little teeny bit like “say your lines”, albeit with a strange accent, and is therefore an excellent pun and I am hilarious. Except that I had to explain it so it isn’t.

This is a blog post with no personal stuff! Woot woot.

OK so I’ve mentioned before that Seyès ruling, or French ruling if you prefer (and want to be WRONG about it), is the One True Ruling. One Rule To Rule that this Rule Rules them all? Tolkien missed a trick there. It is just BETTER than the others, because it will improve your handwriting.  Seyès ruling includes three additional faint horizontal lines for every strong one, and vertical lines as well. The secret to beautiful handwriting is not, as many people think, a load of swirly weirdness. I include the swirly weirdness because it’s fun. But the secret to beautiful handwriting is consistency: however you form each letter, if you form it exactly the same way each time, and if the tops and bottoms of your letters match up with others in all the places they should, your handwriting will be lovely. This is why Seyès is the best: it trains you to line letters up not just at the top and bottom but also in three other places. You can even add diagonal lines to get that sweet sweet calligraphy slant. It was developed by a French dude, Jean-Alexandre Seyès, in 1892, with the express purpose of improving handwriting. It works, and French children still use it.

IF ONLY THERE WERE SOME KIND OF FRENCH COMPANY WILLING TO TAKE ON THE WORK OF PROVIDING ALL OF THIS FOUNTAIN PEN FRIENDLY SEYES LINED PAPER. WHAT A KILLING THEY COULD MAKE.

A colleague once said to me: “I lived in France for a few years, in a little town called Étival-Clairefontaine. There was absolutely nothing there except this enormous paper factory.” I threw a disdain brick at him.  Well indeed.

If you go looking for Seyès paper on somewhere like Amazon, you will get result after result from Clairefontaine. They have that Seyès market so covered they are almost smothering it. Is there anything wrong with that? No. Clairefontaine pretty much set the standard for fountain pen friendly paper, and everyone else inevitably gets compared to them. But it does seem perhaps a little unfair that they are almost the only option. I’m a bit of a Clairefontaine fangirl so I’m well catered-for. What if you’re not?

In a carefully executed budgetary decision (Cantatrice had a bad day and accidentally bought a lot of paper. Don’t judge me) I decided to put down the Clairefontaine and see what else is available, specifically in Seyès ruled notebooks, because there’s a lot less choice. Surely those of us who care enough to get the Seyès goodness in the UK can expect paper worthy of its ruling! What have you got for me, Amazon?

I ordered a few different options, including Clairefontaine’s rival, the Oxford Optik paper which I’ve never paid much heed to before. One of the notebooks I ordered claimed to be Seyès online but then wasn’t when it arrived. I felt betrayed. I felt catfished by paper. I gave that one to my Beloved and moved on with an open mind, some kicking Faure tracks, some Cult Pens Deep Dark Orange (gorgeous ink by the way) and Flappy the Waterman 52. Only the best paper, I reasoned, can handle Flappy’s noodly appendage. Will they feather and/or bleed?

First up, then, was this unicorn pad from Mojito Publishing. Who are they? I had no idea. OPEN MINDED THO. The front cover (which turned out to be far floppier than I had expected – catfished again!) is cute if twee. The paper isn’t great. It’s rough, absorbent, and slightly grey. It feathers and it bleeds. It feels a bit like the paper you get in those logic problems books. I don’t think there’s anyone who’d look forward to writing in this book.

This did not start well but oh look, my mind is still open. Next up: Jaide Print Press. Had I heard of them before? No. OPEN. MIND. 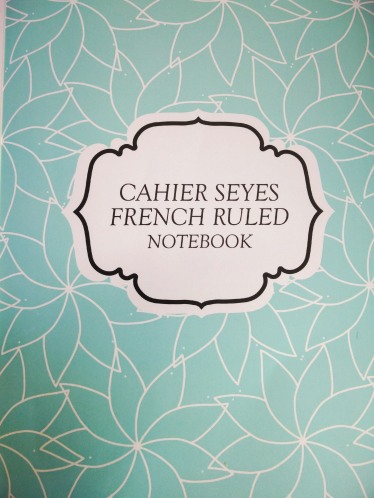 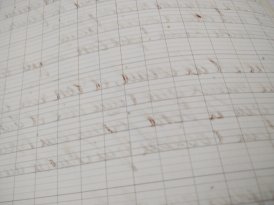 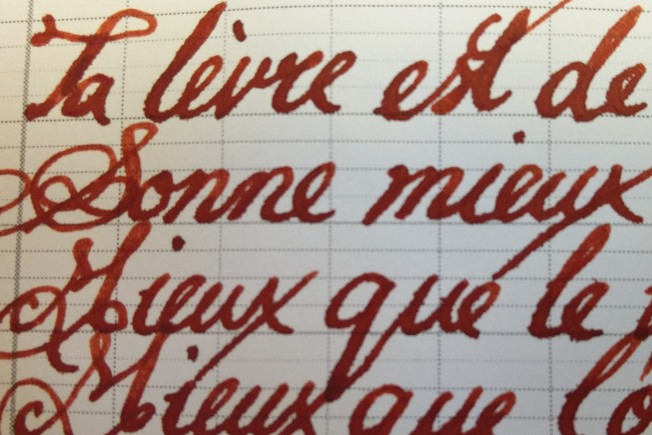 OK our unicorn friend brought disappointing paper, but this one was dire. Not only was the bleeding and feathering even worse, but somehow, the good folks of Jaide Print Press were unable to print the lines with the basic consistency of a home inkjet printer. 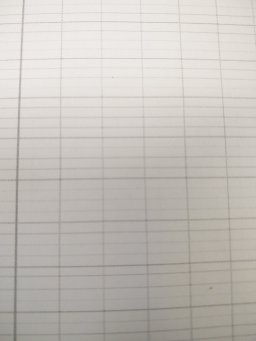 I feel personally insulted by how terrible this print job is, Jaide. Is your name supposed to be “j’aide” as in “I help”? WHAT ARE YOU HELPING WITH? YOU DISGUST ME.

Okay. And now a well-loved Clairefontaine palate cleanser to remind me that paper isn’t all darkness and pain. This is the Rhodia pad that I keep at work, and I’ve just noticed there are only three sheets left because I use it because it isn’t terrible.

And now breathe again. Yes, yes, this is nice. The surface is smooth but not TOO smooth. It is not very absorbent but it is absorbent enough that you don’t have to wait fifty years for the ink to dry. The printing is clear and consistent (way to lower the bar there, Jaide). The lines are clear and sharp with no feathering to be seen. And although it shows slightly from the reverse side, it doesn’t bleed through. I am home. 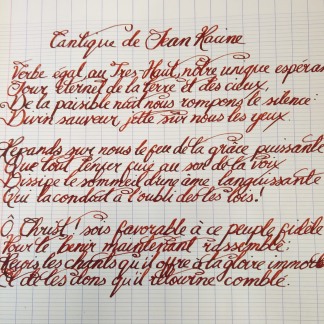 Shut up. Paper reviews are EVERY BIT THIS EXCITING AND YOU ARE ON THE EDGE OF YOUR SEAT. Look I have my brain crammed with Youtube novel-writing advice at the moment. It is impossible for me to not shove a plot arc in here somewhere. TIME TO RAISE THE STAKES.

OK now to the Oxford Optik paper, this cheeky contender which is sort of British. I say sort-of because it’s really more of a smear across Europe with bits and pieces in different places in the way you expect on this timeline between organic business development and international cooperation… and Theresa May fucking every last thing up. Something gives away the fact that this notebook is intended for the French market.

Inside the paper is really… quite beautiful. It’s making me have the feels. It’s making me feel a bit like I’m cheating on Clairefontaine.  No I can’t capture the differences on a rubbish camera on my rubbish phone. I’m not a wizard. The first two notebooks I wrote about had just the one ink shade: black. Actually Jaide had black and about 19 different shades of rubbish grey (I’m still angry with you Jaide). Clairefontaine gives us a red margin with blue lines everywhere else. That’s okay but it can get a little confusing because the emphasised lines are barely distinguishable from the inbetweenies. Oxford gives us the red margin, bright blue inbetweenies and emphasised lines in dark blue. I feel like someone who’s been talked into believing that a razor is better because it has more blades. But actually this does really help. The Clairefontaine paper looked white but now that I compare it… this paper pretty much glows. It’s so crisp and white I feel like I should be doing something really clever with it. I am not doing anything really clever with it.

Mumble mumble grumble grump yes okay this is some good stuff and I guess maybe it does outperform the DON’T LEAVE ME CLAIREFONTAINE OPTIK MEANS NOTHING TO ME. NOTHING!

Wait… is that no feathering and… no see-through at all? None?

I feel horribly conflicted. I need to have a lie down now I think. 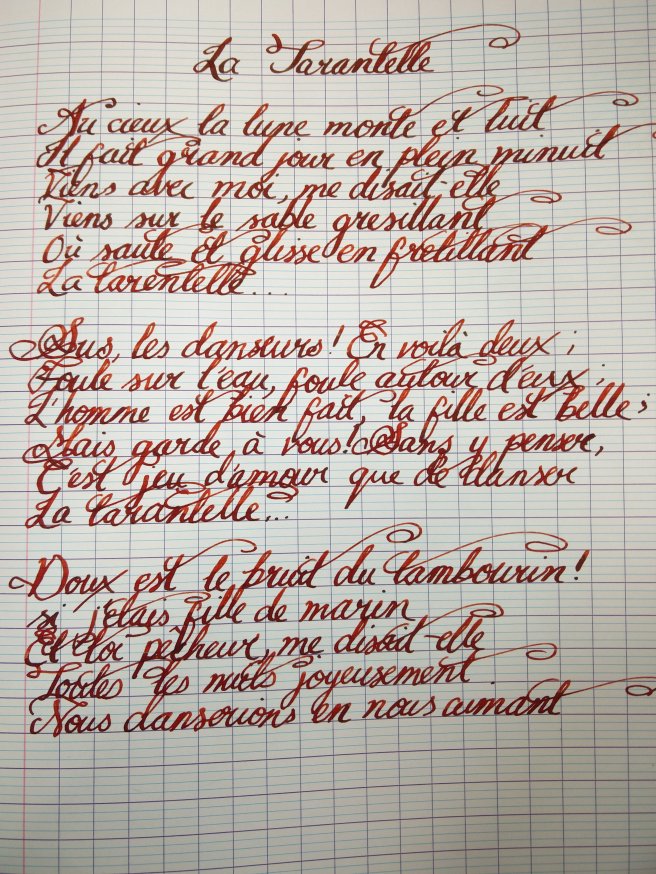