There comes a time when you realise you’ve fallen so far down the fountain pen rabbit hole that you’re gonna see the underworld and snuggle Cerberus’ ears before you reach the surface again. A couple of things hammer the point home. The first is when a certain fountain pen blogger who shall remain nameless (because seriously, he never bloody tells anyone his name) starts telling you you need a fountain pen blog. You protest. He persists. You tell him you will not work under duress. He tells you there is no duress and you’re being ridiculous. You give in.

The second thing is when you find yourself buying a vintage Montblanc when you really have more sensible things to spend the money on.

There are various angles to pen blogging. One of the more common is LET ME TELL YOU ABOUT THE LATEST DEVELOPMENTS IN ROLL-STOP TECHNOLOGY. Another is LET ME TELL YOU WHY THIS £500 PEN IS DISAPPOINTING AND YOU SHOULD SPEND MORE FOR QUALITY. The aforementioned Mr Bloody Duress is more “Hello, friend. Come and join me by the fireside and we’ll have a lovely conversation about nibs. Tea?” So what am I about? I thought about it and realised I’m primarily about stories. And songs, because I’m that annoying person who bursts into song 6294 times a day. So I’ll tell you a story about the Montblanc.

The pen itself is a 342G. If that doesn’t mean much to you it’s basically the cheapest Montblanc you’re likely to find. It dates from the late 1950s. It’s not really a looker. It’s fairly light, flimsy and plastic. It’s a little bit on the small side but not teeny. It doesn’t have the MB white star thingummy on the cap, although it does have an engraving on there indicating that it is a Montblanc. It’s a piston filler which was good because my other vintage pens are lever fillers which can be a bit of a pain. The thing that clinches it is the unremarkable looking nib. It’s a 14K gold nib with a good amount of flex and it writes like an absolute dream. The nib is such a stunner that it’s pretty impossible not to love Monty in spite of his C- Must Try Harder body.

My psychiatrist is a man who enjoys a good pen. (Actually he writes with a Parker 88, but it’s all relative.) Every time I see him I taunt him with a better pen than his, he asks about it, writes down the details and ends up not buying it. Predictably he fell in love with the Montblanc. He joked that he was going to steal it. He asked where he could get one and asked me to alert him to others on sale. He poked about with it, enthused about aforementioned dreamy nib, put the cap back on and then said “What’s this thing on the end? What happens if you turn it?”

I snapped to attention. “Do not turn the thing on the end!”

He looked panicked. “I was not – I was not turning the thing on the end!” And he quickly gave it back to me.

And then I more or less forgot about the experience until I went back to work, took Monty out, uncapped the little bugger and discovered that all of the ink had been emptied into the cap, and from there had exploded onto my desk. If you know the ways of ink explosions, you will know that they do not obey the laws of physics. There may only be a few ml of ink in that pen, but once it is free it becomes a couple of litres. If you are familiar with KWZ Thief’s Red, you will also know that while it is wet it more closely resembles human blood than any other ink you’re likely to find. So when a colleague popped his head around my office door he effectively saw me surrounded with paper towels, mopping up a large quantity of blood off my desk while muttering “bloody psychiatrist. This is all his fault” under my breath. He said he’d come back later.

And now a song. 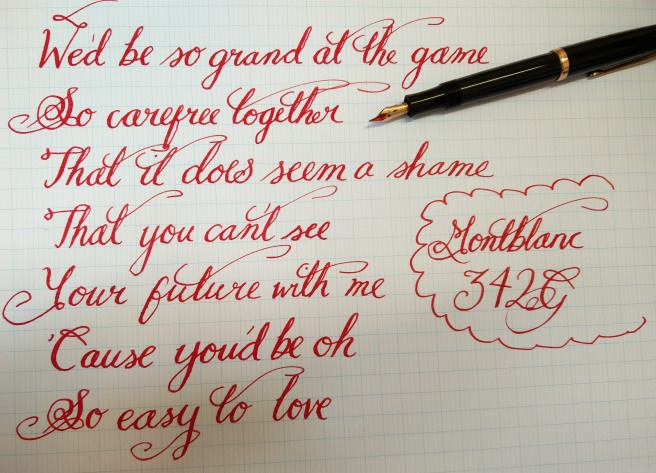 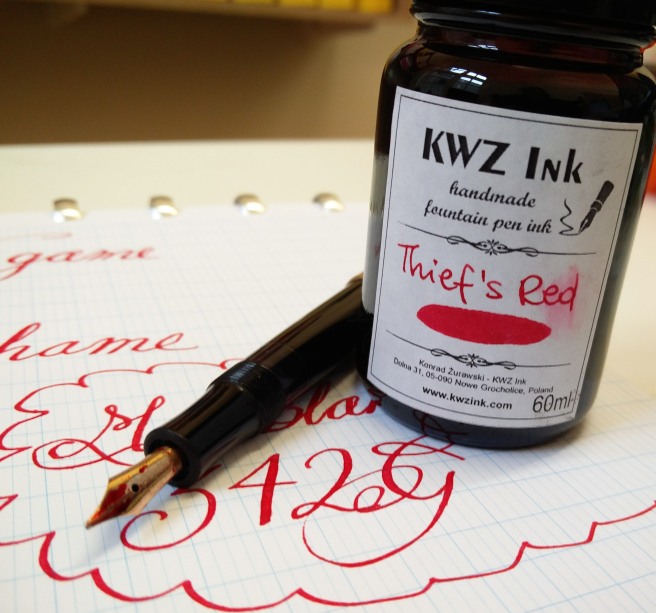